Continued from here…
Ding! The promise of the elevator arriving is calming since he is mere feet away.

The doors open and I quickly press the button to shut the doors. They close just in time, I see the side of his body, the eyes, the teeth, all towards at me from the crack in the doors as they firmly close. I look to the control panel.

It’s broken, old… there are two sets of wires sitting out from behind a bent corner of the panel, the buttons are all missing; the holes still left in the metal. However, no obvious way to work it, I look up to see fifteen numbers above arranged in a half circle and a single clock like hand pointing to thirteen.

Pounding on the door, he is trying to get in, to get me.

In a panic, decide to try to see if the wires do anything, I tap the first set together, the elevator moves. The grinding sound of the elevator, combined with the jerking motion makes me second-guess my choice; I might have been safer with the big guy back there…

The elevator stops at the fourteenth floor, not quite, where I wanted to end up but it beats being chased; now I might actually have a way out of this place.

The doors open and my heart drops.

I press the button to close it as quickly as possible. However, it is not coming fast enough; I vomit.

The doors close and I take a second to collect myself.

The image is still stuck in my head, piles of bodies in the corner, of another hall where they human? I do not know, I could not tell, and I did not want to tell. The animals, dog like but vicious, eating from the piles, I did not want to stick around and find out if they liked fresh meat.

The elevator moves but…

I did not touch anything…

‘Yes!’ I scream as the door opens

Then I am just screaming…

Two large men in white medical coats grab each side of me and pull me out of the elevator. They have me…

Before I know it I’m being transported into another room, similar to the one I found myself in when I awoke. The door is closed and locked; I am officially back where I started…

I don’t get much time to question my misfortune however, the door bolt slides open again and another, different man in a suit walks in.

‘Sit down’ He says gesturing to the table and chair.

I sit; there is nothing else I could do.

‘How did you get in here?’ he starts

‘Do you have any idea of the mess you’ve made!’ he screams back

After some more yelling he explains what this place is, it is the nightmare factory. Somehow, I had been brought here instead of the nightmare to me. He continues to tell me that this is a mess, it should not happen this way and now… they have a missing nightmare. I am given every reassurance that I can go home after I answer a few more questions, I do.

The two men in lab coats, the same two as before escort me back to an elevator, the same elevator.

I’m thrown in and it starts moving right away.

I’m going back up…

It must have been the dinner bell because the door opens and the dog like animals that I found earlier surround me; I kick one. The dog yelps but that doesn’t stop the half dozen others from coming at me. I feel the mouth of one sink it’s teeth into my flesh, then another, THEN ANOTHER. 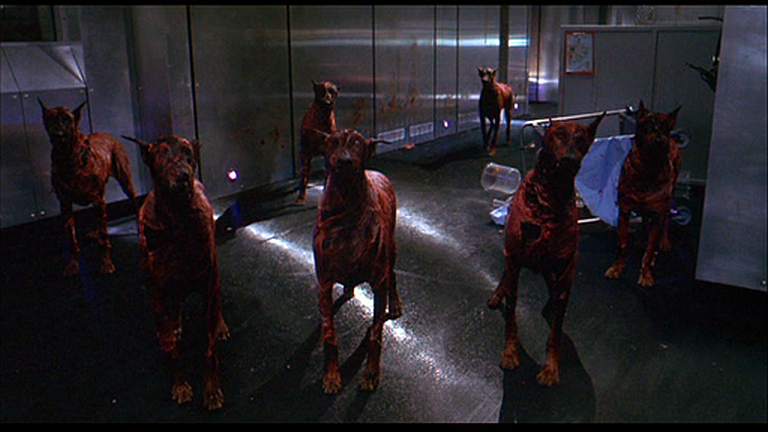 I scream and shoot up

Drenched in sweat, I make my way to the bathroom and wash up.

I don’t go back to sleep after this, but I will be greeted with the same dream off and on for over a month. I hate my nightmares… but strangely, I do love horror movies, maybe because the make me feel not so alone.

What are your thoughts? Cancel reply

This site uses Akismet to reduce spam. Learn how your comment data is processed.

Raiders of the lost ark…ives